(This session was run in October of 2018.  This session immediately follows Session 22: The Bloody Fist, The Poisonous Plume, and the Tome of Entrapment.  To view a map of the world of the Thulaen Lands and to see a list of player characters see The World Map).

The party, bloody and battered, returned to Edgewood carrying their dead companion and his dead dog.  It was a somber march back to the town that considered them heroes.  They dropped off Velnius and Xerbo at the Temple of Kleo to prepare for burial before heading to the Captain of Edgewood to report on the orcs they had encountered.  Captain Grossman commended the party on their discovery and destruction of the contingent of the Bloody Fist Orcs.  He regretted the loss of Velnius and Xerbo, but wanted the party to scout the remaining camp of the orcs as soon as they were able.

The party returned to the Axe and Saw Inn to rest and come to terms with the loss of their friends.  That evening the party received word from a messenger sent from the Temple of Kleo.  The sisters requested the party members attend a ritual that evening.  The party arrived in a somber state, ready to say goodbye one last time to Velnius and Xerbo, but as the ritual unfolded, they were surprised to find that the Sisters of Kleo resurrected both Velnius and Xerbo.  The sisters mentioned that Kleo had sent a sign suggesting the party of adventurers would be crucial in a coming time of trouble for the Thulaen Lands.  The party offered a 1000 GP donation in return for the resurrection services.  Although this was only a small amount given the resurrection service, the sisters accepted the gold in exchange for the possibility that they might call on the party for assistance at some time in the future.

With Velnius and Xerbo back but with lingering effects of their recent return from the dead, the party decided to head back out into the King’s Woods in search of the rest of the Bloody Fist orc clan after a few nights rest.  Before leaving, Captain Grossman requested the adventurers stop by the garrison before heading out.  The captain assigned a militia member, Kessler, to the party since Xrax had been conscripted into a different militia group to patrol around Edgewood.  Kessler greeted the party members and asked for a quick briefing of their previous encounter with the orc’s band.

The party picked their way slowly through the King’s Woods following game trails.  They progressed slowly, in part to keep on the alert for orcs other hostile creatures, and in part because they brought their donkey and cart with them which at times got stuck on errant tree roots and branches.  A little brute force or hacking away of clinging branches got them back on their way.

While tracking back through the King’s Woods to the site of the last battle, the party found themselves the target of a goblin ambush.  Emerging from the trees all around them came the growling barks of worgs with goblin archers on their backs and bugbear brutes ready to carve the party to pieces with their axe blades. 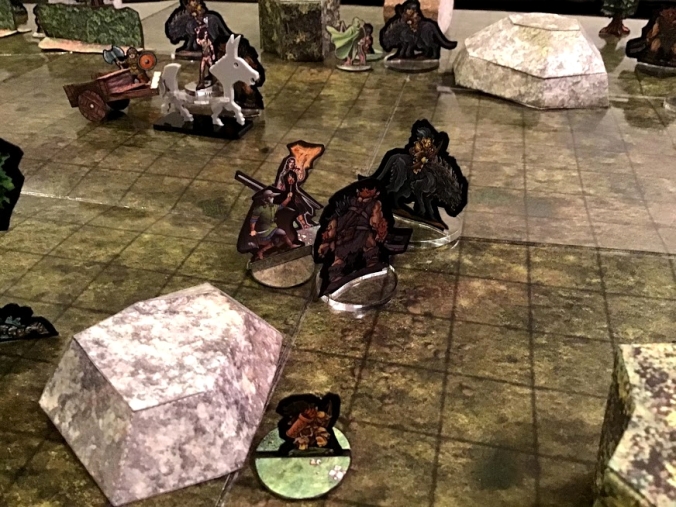 The goblins effectively flanked the party of adventurers, forcing them to divide their attacks across the various enemies instead of focusing their firepower on one target.  Kessler and Pabelle held fast to the cart worried the goblins would steal off with it. 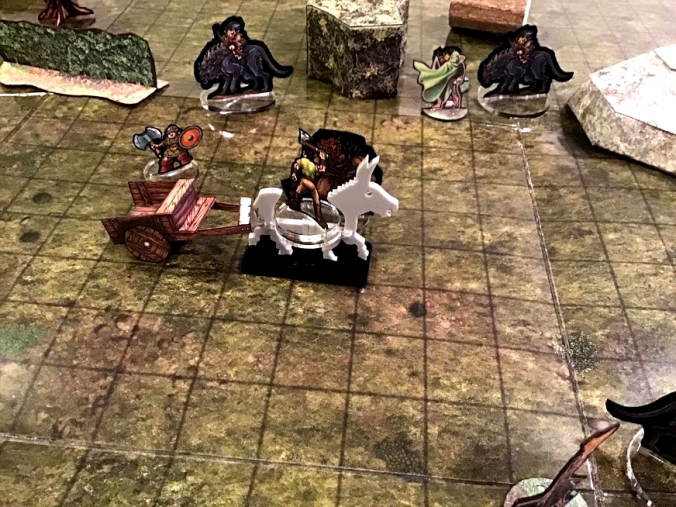 The party of adventurers worked to limit the damage of the bow attacks from the mounted goblins on the worgs.  This meant they had to spread their attacks across many enemies, but the tactic was working.  Goblins and bugbears were starting to fall from the fight, their life’s blood drained from them into the forest floor.

As the tide of the battle turned, the remaining goblins fled on their worgs hoping to raid and plunder another day.  The bugbears fought to the death and whether by sword or spell, death was their lot.  The fleeing goblins tried to disappear into the woods, but Kulo’s longbow aim was true.

The party picked through the meager belongings of the goblinoids.  Healing spells revived injured warriors.  After a short rest, the adventurers continued tracking the Bloody Fist orcs back to their hideout.

After several hours the adventurers found themselves on the edge of a clearing around a cave entrance to a hilly escarpment.  A campground filled the clearing spotted by dirty canvas tents and the remains of old fire pits.  But the camp was quiet and appeared unused.  The adventurers observed movement at the cave entrance.  A couple of orc sentries emerged to stand guard.  The adventurers remained undetected.

Kulo and Belladore scouted the escarpment and found another entrance into what appeared to be the same cave system to the north.  Belladore used her magical cloak to turn into a bat to examine the northern entrance to the cave system.  She discovered two passageways leading from the entrance, one heading south towards the orc clan and the other east.  Belladore explored the eastern passageway first up to the point that she detected some indistinct forms against the ceiling right at the bend of the passageway as it turned south.

Belladore turned around and returned to explore the passageway south.  She flew for about 80 feet before observing what appeared to be a barricade of rocks partially blocking the cave with the orc clan.  Flickering camp fires and voices could be heard beyond the barricade.  Belladore, in bat form, landed on the wall of rocks for a moment before returning to the northern entrance.  During her brief pause on the barricade she spied the clear shape of a cage with two humanoid forms visible within down a side tunnel to the east.

The adventurers considered their options: a direct assault or a stealthy attack from the rear.  Belladore did not like the barricade, fearing they would get pinned down there or succumb to a trap.  She favored a direct assault.  The rest of the party agreed.

Moving stealthily through the empty camp, the party sneaked up on the guards at the cave entrance with the help of Tanin’s casting of Pass Without Trace.  They quickly dispatched the guards.  The party observed the clan of orcs undetected, noticing what appeared to be some type of spell caster near the back wall, a smallish orc with red robes, ceremonial hat, and a staff. They all agreed to focus their initial attack on the sorcerer before taking on the rest of the orcs.

With surprise, the party moved in and dispatched the orc shaman.  The rest of the orcs jumped up from their arguments and dice games, muttered grunts and curses, grabbed their weapons, and readied themselves for bloodletting.  Deathly battle commenced!

Full Disclosure: Some of the following links will take you to DriveThruRPG.com or DMsGuild.com where I participate in the affiliate program. Any purchases through these links provides me with a credit at these sites. Your support is appreciated.

Forest Battle Mat (in first and last pics): D&D Adventure Grid by Wizards of the Coast

Support Me on Ko-fi