(This session was run in July 2018.  In terms of campaign time, this adventure took place immediately after Session 21: The Many Hands of Vengeance.  To view a map of the world and a list of player characters, see The World Map).

The adventurers returned to Edgewood with the severed head of the troll matriarch.  The captain of the Valeriun garrison paid them their reward money for ending the troll threat along the roadway.  The captain explained to the party that Edgewood was on heightened alert because of increasing orc and goblinoid activity in the area.  Valerius was dispatching a larger force to Edgewood to deal with the menace.  In the interim, caravan travel between Edgewood and Valerius was not recommended.  The captain had already spoken with the Makriyannis family and they agreed to stay put in the town until the road between Edgewood and Valerius could be better secured.

The small Valeriun garrison in Edgewood was needed to protect the town and patrol the immediate surroundings.  The captain offered to hire the adventurers for a more extensive patrol of the woods surrounding Edgewood.  The party agreed since it seemed as if they would be sticking around Edgewood for a bit longer with the wedding caravan at a temporary halt.

The party marched back down the road to Cyr for more than half the day.  The morning was peaceful and not too hot for early summer.  News of the growing orc and goblinoid threat must have made it to Cyr since the traffic was nearly nonexistent along the roadway.  The party passed one merchant wagon headed to Edgewood.  The mercenaries guarding the wagon eyed the adventurers suspiciously.

A little past mid-day, the party encountered a lone traveler on foot, an orc.  The party instinctively loosened weapons in their scabbards.  As he got closer, they realized that he was heavily laden with numerous weapons, most in a large sack slung over his shoulder with a makeshift strap across his chest.  The orc and the adventurers paused at a safe distance in order to gauge the danger of the other.

The orc spoke, “Ho, travelers, I am Ruhk.  You look like you know your way with weapons.  Might be, I have others to your liking.”  And with that greeting, Ruhk, dropped his sack of weapons to the ground and opened it so that the weapons could be seen more clearly.  He moved back a step and motioned with his hand for the party to take a closer look.

Tanin asked, “Are any of the weapons magical?”

“No,” Ruhk replied, “but most are very well-made.”

Kulo and Tanin took a closer look at the weapons.  The orc was right, the weapons were of considerable quality compared to typical orc weapons.

“And you have no other magical items,” asked Belladore.  Ruhk paused for a moment and then reached into one of the pouches hanging from his belt.  He retrieved a gemstone, about the size of a peach pit, and held it up until the light of the sun caught the angles of the cut gem and sparkled before the adventurers.

Belladore stepped up to take a closer look, but Ruhk held up his other hand.  “What do you have in exchange?”

Belladore looked over her belongings and realized she was still carting around a couple of bottles of good wine she had lifted from the wine cellar of Makriyannis a month earlier.  She handed over the bottle.

Ruhk looked it over skeptically.  He bit down on the cork protruding from the top of the bottle, spit it out, and proceeded to guzzle the entire bottle down in one long pull.  He wiped his mouth on his sleeve, then motioned to Belladore to hand over another.

She handed Ruhk her last bottle.  He handed over the gem.

“I’m from around here,” Ruhk replied generally.  “I take orders from no one.  I live as I please and I sell weapons to pay my way.”

“Do you know of any orc clans in the area?” asked Tanin.

“Maybe.  But that comes at a price,” Ruhk explained with a grin.

Xrax stepped forward and spoke with Ruhk.  “How about a wager,” he asked.  Pulling out one of his javelins, “I bet I could hit,” he looked around briefly and then saw a large knot in a tree, “the center of that knot more accurately than you.  If I do, you tell us about this clan of orcs.”

Ruhk glared at Xrax, the bottle of wine possibly having an effect for the first time.  He nodded and then motioned for the others to give he and Xrax some room.

Xrax said, “You first,” and motioned for Ruhk to take a shot.

Ruhk’s first shot went wide, not even striking the tree.  Xrax, chuckling to himself but trying not to anger the half-orc, stepped up and let his javelin fly.  All of the adventurers mouths dropped as they watched as Xrax’s javelin struck the dead center of the knot.

Xrax looked at the fuming half-orc.  He said, “how about two out of three?”

Ruhk stepped up and threw his second javelin.  Again, it went wide not even striking the tree.

Xrax maintained his composure as he moved into position.  He unleashed his second javelin.  After the missile lodged into the tree with a solid thunk, again the adventurers were amazed to see the javelin dead center in the knot of the tree, the point embedded in the tree right next to the first.

Xrax looked at Ruhk with a grin.  “So, you were saying?”

Gritting his teeth, but honoring his word, Ruhk said, “yes, there is a clan not too far from here.  Called the Bloody Fist.  They bought some of my weapons.”  Ruhk related the general direction of the clan with a wave of his hand.

Kulo asked, “How many of them are there?  Are they well-armed?”

“At least three times as many as you.  They bought some of my weapons, so yes, they are well-armed,” Ruhk smiled at that last statement.  “They also have a couple of captives.  A half-orc and a human barbarian.”  Ruhk described the captives further, clearly describing Lykopsis and Seraph.

Kulo joined in on the side conversation, “We left them in Cyr.  How did they get captured?  They were guarding the Golden Tankard.  Who is running it now?”

“If our business is done, then I’m on my way,” Ruhk said and slinging the sack of weapons on his back, he headed up the roadway.

The party members conferred for a brief spell, but they reached a unanimous decision in short time.  They were on the hunt for orcs and with what sounded like Lykopsis and Seraph in bonds, the adventurers needed to make haste.

Velnius led the way into the woods finding a deer trail that meandered through the brambles and trees.  Velnius spotted boot prints too, making the path well-worn and fairly easy to follow.

After a few hours of slow progress through the woods, the party overheard deep voices coming from up ahead.

Kulo moved up stealthily, spying through the brush three large creatures having an argument, two ogres and a two-headed giant.  Kulo crept silently back to his group and explained what lie ahead.  The party discussed tactics.  Since the ogre and ettin appeared to be oblivious to their approach, they would spring a surprise attack on the monsters.

The adventurers moved closer to the arguing giants, their grumbling voices covering the slight sounds the adventurers made as they moved behind a couple of boulders ready to spring their attack.  At the nod of a head, Belladore peered around the boulder and cast faerie fire on the ettin and one of the ogres.  The rest of the party members emerged simultaneously to unleash arrows, bolts, and hammers.  The battle was joined!

The party members quickly took down the ogre glowing from the faerie fire and dealt some significant injuries to the ettin.  Xrax, the mighty warrior that he was, let out a battle cry and engaged the ettin directly in melee.  But before the adventurers could get too comfortable at the progress of the battle, several orcs emerged from the woods and joined the fray.

One of the orcs charged forward towards Tanin.  He appeared very sickly, covered in pustules all over his body.  When he got close, he tore out his own throat with his claws.  As his life blood poured out, his body exploded, covering Tanin in infected pus.  Tanin’s fortitude was sufficient to mostly offset the poisonous properties of the foul discharge.

More orcs poured forth from the woods.  Gaining the attention of all the party members, however, was a large orc riding a giant lizard.  This commander of the orc tribe barked orders directing the battle.

Tanin found himself engaged with the leader and a monstrous orc that appeared unsurpassed in ferocity.  Likewise, Xrax battled a similarly ferocious monstrous orc along with two minions.  Belladore assisted Tanin, engulfing the commander orc in a bonfire that erupted right under the giant armored lizard.  Pabelle similarly aided Xrax by invoking her druidic magic and calling forth a beam of radiant light from the moon on two of the orcs surrounding him.  The beam seared the green skin of the orcs.

As the battle raged, Velnius and Xerbo became surrounded by a group of orcs.  The blows raining down on him resulted in a number of bleeding cuts.  His position was precarious. 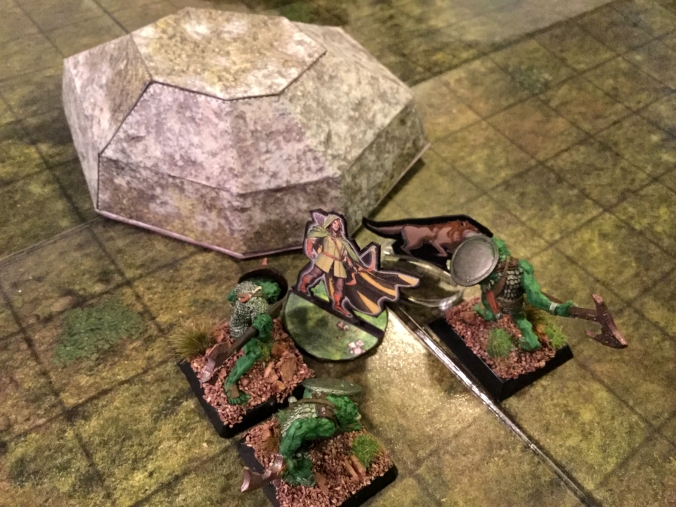 But then one of the orcs fell.  And then another.  The tide began to turn and sure victory seemed imminent for the heroes.  The orc commander astride his war lizard, seeing his troops falling and with no immediate reinforcements to bolster his side, pulled a horn from off his belt and with a deep blow, sent a blast of sound resonating through the surrounding woods.  The heroes paused momentarily, wondering just what that sound would alert.

The battle continued unabated with the heroes bringing the fight to the orc commander who eventually fell to their blows.  Xrax and Kulo came to Velnius and Xerbo’s aid helping to dispatch the remaining orcs that had surrounded them.

The sound of a large winged animal grabbed their attention.  Just as they started to examine the bodies of the orcs they had killed, a young, green dragon appeared before them hovering in the air with its wings swooping to hold it steady about 20 feet away.  As the realization of the danger dawned on Velnius and Kulo, the dragon exhaled a plume of poison that enveloped Xrax, Velnius, Xerbo, and Kulo.

The dragon began to lift up and pull away from the battle.  Tanin charged ahead and scrambled up the large rock next to his friends who were choking from the dragon’s breath weapon.  As the dragon made an attempt at escape, Tanin pointed at the creature and spoke the incantation of the Tome of Entrapment.  In an instant, the green dragon appeared to stretch from his location to the book, like the creature had undergone a transformation into a mist or gas.  The book drew in the stretched and elongated form of the dragon, even as the beast’s wings beat futilely one last time.  A rushing sound filled the air that ended in a cluck.  Tanin blinked a few times, looking down at the curious round tome in his hand and back to where the dragon was last seen. The dragon was no more.

As the poisonous plume cleared, the party members were left with a devastating sight.  Velnius and his companion, Xerbo, lay dead on the forest floor.

Full Disclosure: Some of the following links will take you to DriveThruRPG.com or DMsGuild.com where I participate in the affiliate program. Any purchases through these links provides me with a credit at One Book Shelf sites (DriveThruRPG, RPGNow, DMsGuild, etc.). Your support is appreciated.

One thought on “Session 22: The Bloody Fist, The Poisonous Plume, and the Tome of Entrapment”